Zeeshan Farooq, a product manager by day and Islamic calligrapher by night, never thought his hobby would become a serious business one day.

Farooq, who migrated from Karachi, Pakistan in 2001, moved to Chicago to study engineering and continue his career as a developer. But, he missed doing Islamic calligraphy.

“The opportunity to express art in the United States is much more than what it was in Pakistan,” Farooq said. According to Farooq, most of the artwork that he made in Pakistan usually stayed in his home. He attended a 30-minute art class in a Pakistani school, but was never encouraged by his teachers to pursue art as a career.

“A lot of people do it as a hobby, and people who become an artist there are usually criticized by others that you became an artist because you didn’t have anything better to do,” Farooq said. 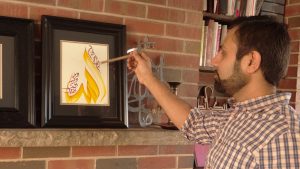 In 2004, Farooq launched a website called Creationzart, but is wasn’t until 2008 that he started taking his artistic life more seriously.

“Someone suggested I do wedding calligraphy and I did that for five years. I used to do wedding invitations in calligraphy and I got bored out of it,” Farooq said. “Moving from that, I started exploring Arabic calligraphy, and then I had my first exhibition in 2011 at an Islamic convention and it was very well received. I had about four to five pieces.”

So far, Farooq has participated in five conventions around Illinois since 2011. 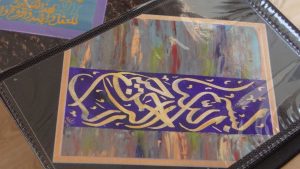 According to Farooq, younger people like his Islamic calligraphy because it differs from what they saw in their childhood homes.

“What they have seen is just in black and gold in their parent’s living room, which was not very modern and contemporary. Colorful calligraphy appealed to them more because it is matched with their curtains or furniture,” added Farooq. 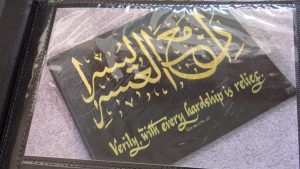 Ayat Al Kursi verse is one of the many examples of the calligraphy art that people put in their houses.

The verse speaks about how nothing, and nobody, is regarded to be comparable to God.

Most of the Islamic calligraphic work, which contains the ayats from Quran, will not have any pictures in it but might have an illustration of Mecca or Medina, which are the two holy cities of Islam, both associated with the Prophet Muhammad. 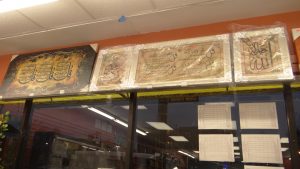 When asked about the importance of Islamic calligraphy in a Muslim household, Hesham Rustami, manager of Sound Vision, Islamic Information Center on Devon Avenue, said, “People display it depending on what ayat or which verse it is in the Quran.” Most of the calligraphy work in the bookstores on Devon Avenue are imported from other countries such as Pakistan, India and Afghanistan.

King Sweets owner Zahid Anwar, who is also a founder of Global Research Organization, is a Pakistani immigrant who migrated to Chicago in 2001.

“I ordered my Ayat Al Kursi during an exhibition that happened in 2002. I had to choose a design and the one in my restaurant I pre-ordered,” said Anwar.

“I have not heard of calligrapher artists in Chicago; mostly you have to pre-order and the ayat is imported from Pakistan,” added Anwar. But Farooq wants to change that, and expose more people to Islamic calligraphy in the United States.

Farooq uses verses from the Quran because he believes it is part of his life, and he wants to show the beauty of the Quran, which, according to him, is not well represented in mainstream media. 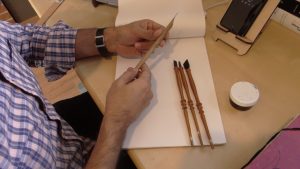 “This is Quran first. For us this the message from God sent to us through his prophet,” said Rustami. “So, whether it be from the book, whether it be by looking at the art, which is the calligraphy or maybe listening to a CD or a cassette, it is to have that awareness that it is a message of God brought in to our life.”

Farooq is planning to start his own Islamic calligraphy classes in Skokie so that the kids in today’s generation can learn more about it.

“It’s a beautiful religion. It has a lot of things that people don’t really pay attention to, like art,” Farooq said. “One of my intentions is to explore this Islamic calligraphy, and then show the world that it has beauty in it.”