Zac Lowing likes to say that he is commiserating with the beat-up and rusty. He is a street photographer who documents the abandoned and unnoticed in obscure places using only his Samsung Galaxy S2.

Though he is braver than most when it comes to exploring dark alleys, his most recent commission has him frozen with anxiety.

“My artwork isn’t selling that well. I’m getting low on money, and the only gig I could get right now is really stressing me, for little pay,” Lowing said.

With no other options, Lowing took a job for the Urban Art Retreat documenting all the public art in North Lawndale.

Lowing has only visited North Lawndale once before, on a three-day sojourn to Cook County Jail. He remembers the night he got out of jail and had no way home.

“The night I got out of Cook County Jail, a taxi cab driver gave me a ride, even though I didn’t have money. He said he didn’t want me to get jumped,” said Lowing.

A year before his arrest, Lowing was given a ticket for owning guns while on suicide watch. He was told to appear in court and the charge would be dropped, but he forgot to attend his court date. He didn’t realize there was a warrant out for his arrest until a cop identified him at O’Hare airport and put him in handcuffs.[pullquote]Zac Lowing’s art is online[/pullquote]

He describes his first day in jail as the most miserable day of his life. He remembers being packed into a bullpen that was about 20-by-20 with about 140 other inmates, most of them “dope sick and kicking.”

Considering the hardships he has been through, one might expect Lowing to be a rough person, but he is cheerful and easygoing. He keeps a shaved head and goatee and wears stylish Ray-Ban glasses. In addition to photography, he also makes computer graphic art and builds sculptures out of LEGOs.

Lowing’s struggles began at the Hostess Bakery Factory in Schaumburg where he was a mechanic. One night, while working a graveyard shift he had a nervous breakdown and ended up in the hospital with dehydration and severe anxiety attacks. After the attack, he became a self-described hermit for nine months, holed up in his apartment creating computer graphic art.

He turned to alcohol to blur the PTSD-like symptoms he experienced, but the art he sold wasn’t enough to support his habit. He soon ran out of money. When his power shut off, he sat in the dark for five days until he tried calling 911. The phone still worked, and he was sent first to a psych ward, then to Pacific Garden Mission, a homeless shelter in East Pilsen.

“I thought I was going to be shaking up the world and doing all this great stuff, and I ended up down there, cleaning toilets for six months. It was a really humbling experience,” Lowing said.

While living in the mission, Lowing had to give up access to all electronics, so he was no longer able to practice his favorite medium of art, the one that he had become addicted to — computer graphics. Instead he began drawing by hand.

“When I was at the mission, I did crosses with red pens,” said Lowing. “It would take an hour to do each one. I made a point in my head that the first person to walk by and say they liked it, that’s who I would give it to. I think I helped a lot of the guys out because there wasn’t a whole lot of artwork there. It was something to brighten up their day.”

With the support he received at the mission, he was able to get back on his feet, and move into a small apartment in Logan Square. Now he is trying to support himself as an artist once again, but he worries that he won’t earn enough to pay his rent each month.

Lowing explains that people often “like, but don’t buy” his work. He admits that the artwork he creates is different from that of most fine artists.

“A lot of people do artwork to shock — to express their inner angst,” said Lowing. “We all have nightmares. I don’t want to drag people through mine. I want to help them escape from it.” 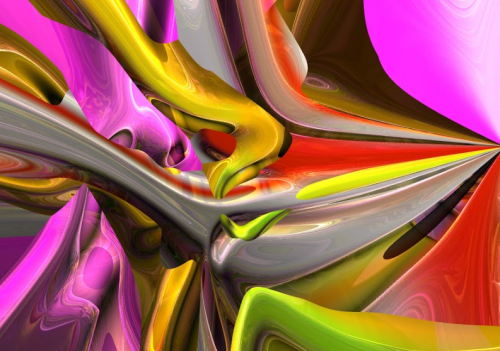 He acknowledges that most of his computer graphic artwork doesn’t mean anything beyond shape, color and curve.

Lowing also feels out of place in the Chicago art scene because of his religion. Most of the artists he has met don’t believe in God, he said, which made it hard for him to relate to them as a Christian. Though for Lowing, his faith is all he’s had to protect him in times of peril, and it’s the thing that keeps him positive about the future.

“There’s a reason for everything,” said Lowing. “Trying to understand what God’s doing as a three-dimensional person — God is infinitely dimensional. How do we really understand it all until we get up there? It’s like they say ‘your path seems really winding and twisting’. When you get up to God and you turn around, you see it was a straight line to him.”

Published in Art and Religion