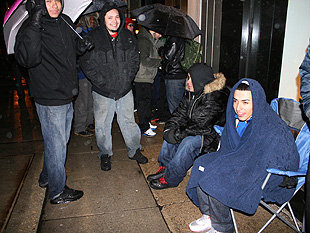 For sneaker collectors, camping out for their pair of shoes is a tradition that’s been going on for years. But with all the violence happening during sneaker releases, that tradition is slowly coming to an end.

“Camping out is a staple in the sneaker game for me”, said Southern Illinois student Sean Poshka. “Now that it’s going away, I think the fun is no longer there”.

Typically a popular shoe releases on a Saturday, whether it be at midnight or in the early morning hours. In order to ensure a collector gets their pair, many camp out hours before the scheduled release time. Camping out provides the collector the chance to not only get his pair, but to also make new friends and discuss the sneaker community around them.

Camp outs can last anywhere from a few hours to a few days. Just two years ago when Nike released the popular Nike Air Yeezy I, many people were spotted camping out up to a week before the shoes release date. Crazy? Maybe to you, but to others it’s a way of life.

That way of life might not be part of the sneaker community much longer.

Just this past year Nike, the largest sneaker manufacture on the planet, announced the end of midnight releases and their move to eliminate camping out with a special Twitter RSVP system.

The system sends out a tweet from your local Nike store, and you have to reply with your size and name just to be entered. Here’s the tricky part: You’re not even guaranteed a pair through the system, as it picks the winners in order. The winners are then notified and have a certain time period to pick up their shoes at the local Nike store.

This has caused quite the stir among sneaker collectors across the country. Many collectors disagree with Nike’s new policy, but it’s something they have to live with. Other people however think it’s fair and an easier way to get sneakers.

“I hate it. I know it’s for safety, but it’s not the most fair method”, said Poshka who is against the system.

So what happens if you can’t pickup your shoes during the allotted time? Well Nike simply puts them on the shelves and it’s first come, first served to the public.

When Nike made the move to eliminate camp outs at retail stores across the country, they did it for one reason, safety. Just over the past year there has been two incidents stemmed from sneaker releases.

Last December Nike released the Air Jordan XI “Concord” model. The release was a popular one across the county and gained the attention of collectors and re-sellers nationwide. People gathered at local malls up to three days prior to the midnight release. Many riots, fights and arguments were caused over this release. It’s safe to say this was the initial incident that grabbed Nike’s attention.

The second violent release came just a few months later when Nike released the Nike Galaxy Foamposite. The shoe was so limited that very few stores across the country released them. The rareness of the shoe caused many collectors to pay over $1,000 just to get their hands on a pair. Moments before the midnight release in Orlando, a riot broke out and eventually some retail stores cancelled the release. That was the nail in the coffin for the end of camping out at Nike retail stores.

“Its crazy that people will fight and even kill someone over a pair of shoes. I’m obsessed with them, but I wouldn’t go that far,” said shoe collector Jerry Souyavong. “I’ve collected shoes for over five years now, but it’s not worth my life”.

Nike wasn’t the only shoe company to cancel midnight releases. Over the past summer retail store FinishLine announced they would be using a new method for the release of popular shoes. Much like Nike, they have gone to a online system.

Local Chicago stores like House of Hoops on State St. has implemented a ticket system where people show up on a specific date to grab a ticket. They can then exchange their ticket for the shoe on that shoes release date.

“I think the RSVP & ticket systems are working. We don’t have to worry about the safety of our customers anymore”, said House of Hoops employee Angela Wilson.

The next test for Nike’s RSVP system comes this month when the Air Jordan XI “Bred” releases. Local boutique stores like Succezz are preparing for one of the biggest releases of the year and expect things to get crazy.

“The Bred XI release is going to be nuts, there’s a lot of people wanting them”, said Succezz employee who goes by “Dre”. “This will be another crazy release for Jordan Brand, hopefully everything goes smoothly”.

The system is different however, and to many collectors “not fair at all”. It’s more of a raffle rather than a system, which has caused the negative reaction from many collectors. FinishLine sends out an email telling you about the release, with one click you are entered into the drawing. The winners are selected randomly, and must pick up their shoes during a certain time slot.

So what does the future hold for campouts? It’s looking very bleak, especially with many retail stores going to raffles and RSVP systems to get their shoes. But campouts aren’t dead, yet however. Many boutique stores still allow campouts for popular shoes, but in the future many expect them to make the same move Nike & FinishLine have made.

“I don’t think campouts are dead. They will be back as long as Nike decides to release sneakers, people will camp.” Said Wilson.