Friday may not be the day to take the new boat out or jog along the Lakeshore, according to Justin Roberti of Accuweather.com.

Should you fall into the lake, be sure you know how to deal with rip currents. While the terms rip tides and undertow are sometimes used, the National Weather Service explains those are incorrect terms, and rip current is the term for the risky conditions that strong wind and waves can set up along any body of water.

The storm system responsible for locally drenching rain and even waterspouts into the weekend will kick up the wind, wave and rip current action in the region, making it especially rough from Thursday evening through Friday on the south end of Lake Michigan.

On August 6th, three men drowned on the Michigan side of the lake in large waves. The three victims were a pediatric surgeon from Chicago, a 41-year-old from Montgomery, Ill., and a 40-year-old from Cincinnati according to Wood-TV , a station that reports from Michigan. The three men were overpowered by waves and rip currents.

Stiff northerly winds are likely to produce waves that could be breaking over the shoreline in some areas. Folks who have a daily walk, bike or run along the lake may need to alter their plans. 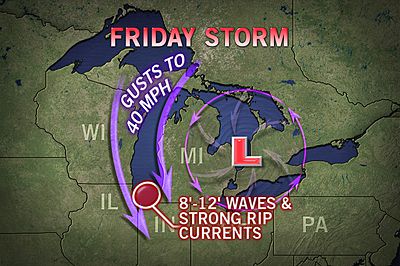 At peak Friday, waves of 8 to 12 feet are likely over the open waters of Lake Michigan from Rainbow Beach to Indiana Dunes National Lakeshore.

Rip currents form on all beaches where waves occur.  The National Oceanic and Atmospheric Administration National Weather Service site,  explains rip tides or currents begin “as waves travel from deep to shallow water, they eventually break near the shoreline. As waves break, they generate currents that flow in both the offshore (away from the coast) and the alongshore directions. Currents flowing away from the coast are called rip currents.”

Rip currents are not always easily identifiable to the average beachgoer, but some indications include

If you see someone in trouble, get help from a lifeguard. If a lifeguard is not available, have someone call 911. Throw the rip current victim something that floats and yell instructions on how to escape. A sad fact is that many people drown while trying to save someone else from a rip current. Experts say there are steps that anyone should take instead of jumping in to save a struggling swimmer.

“Preferably, you reach, throw, go,” explained Capt. Owen Ridley of South Haven Emergency Services, in another story about near drownings in rough seas in Lake Michigan this month.

“You reach for them, and if you can’t reach them you throw a life ring or some other floatable device to aid them back to the surface. Then, if all else fails and you have no other option, you go in after them.”

On Saturday, waves will begin to ease on the western side of Lake Michigan but will still cause problems on the eastern side.

Published in Community and Editor's Choice