Tragic Past No Obstacle for Lakeview Nail Salon Owner

In an area flourishing with independent nail salons, the owner of Hollywood Nails manages to craft a unique experience that keeps customers coming back. Customers say it’s Nancy Pham’s cheerful demeanor that keeps them visiting her small Lakeview shop. But one might not guess that this entrepreneur with a go-getter attitude survived a tragic past to get where she is today. 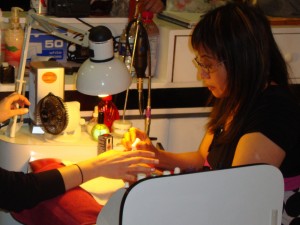 Nancy Pham polishing off a manicure in her nail salon.

Nancy Pham polishing off a manicure in her nail salon.

Greeted with a “hi honey,” or “what can I do for ya’ sweetie,” Pham makes her clients feel welcomed and part of the Hollywood Nails family, which consists of herself and her coworker sons. But while she’s always upbeat and joyful, Pham has not always had a cheery life.

Growing up in Da Nang, Vietnam and reaching the status of master seamstress by the age of 17, Pham sought out a safer and better life. She fled from the ongoing Vietnam War, boarding a ship with a couple hundred people that headed for the Philippines.

She never expected pirates to bombard the ship, but that’s exactly what happened; they killed the majority of the men and raped many of the women. Pham remained as one of the handful of survivors that safely made it to land.

She stayed in the Philippines for under a year, finally making a series of boat trips that brought her to Florida. Once in the States, Pham continued her work as a seamstress until getting dangerously ill; taking advice from a friend, she headed to Chicago for better hospital care.

Pham recovered from her illness and moved with her children to an apartment in the Uptown community of Chicago. She went to work in nail salons and did seamstress work on the side until she received the opportunity of a lifetime from a single phone call.

A friend was selling his nail salon and was looking for a buyer. After saving for years, Pham decided it would be a good investment and reopened Hollywood Nails in 2002. Without help from family or friends, Pham set her title as an independent businesswoman and began to run a small nail salon known for great customer care.

“She’s very loving and accepts everyone as if they’re one of her family,” said Michael Dang, Pham’s eldest son, who has worked in her salon for six years now.

“I think she’s a very sweet, kind-hearted person,” said Long Pham, who has worked for her for four years.

Long Pham claims his mom is a perfectionist; his mother seems to agree. Nancy Pham believes that her greatest achievement in life was opening her business and gives thanks to her outstanding determination and willpower. She puts great emphasis on remembering customers’ names and making them feel at home.

“I really appreciate everything Nancy has done to make me feel welcomed as a valued customer … she’s always cheerful,” said Robin Erickson, a longtime customer.

If home is where the heart is, than Nancy Pham surely puts the topcoat of love on it, keeping all her customers satisfied. Hollywood Nails, which has recently relocated to 650 W. Cornelia Ave., across the street from its original location, remains her pride and joy and the scent of freshly painted fingers will forever keep her smiling.